All the latest news, press releases, updates and announcements from Fuze360.


What is ‘true native’ advertising? 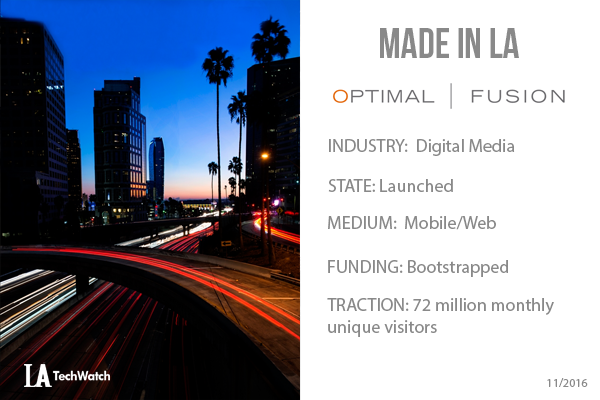 LATECHWATCH.COM, NOVEMBER 17, 2016 -- How well has your paid brand engagement been doing lately? Be honest. If it is has been suffering or you can’t measure it easily, you are not alone and could need some help. More specifically, you can use the latest offering from Optimal Fusion. The LA Startup aggregates multiple brand engagement products into one single unit that actually guarantees results. That’s right. GUARANTEES! The platform includes a video rolls, in contact ads, and a host of other services to in a centralized place. With customers like Microsoft and Disney, the company is well on its way to redefining the ad experience.

LA TechWatch spoke with the Optimal Fusion team about the compayn, discussed its latest Fuze360 offering, and where the company plans to go in the future.

Tell us about the product or service:

Fuze360 is the recently launched signature offering from Optimal Fusion. The first-of-its-kind native-instream ad platform has effectively eliminated risk for marketers by contractually guaranteeing KPIs and backend results customized for each client in advance. In a short time, the platform has achieved unparalleled success for a wide range of small, mid-size and Fortune 500 clients including Disney and Microsoft.

How is it different?

There are five major overwhelming differences between traditional ad platforms and Fuze360: scale, risk mitigation, pricing, ease of use, and performance. We have created unique ad products which are rarely packaged together in a single execution. Whereas previously, a brand would have to cobble together a number of vendors to deliver banners, sponsored content, video, and first party data collection, Fuze360 can offer advertisers a single unit with all of these tools at a flat rate along with KPI guarantees.

Essentially, we are offering brands a section or a microsite within a premium third-party site to show offer their wares. For example, we created tools like ContentCard after realizing that our clients’ struggles scaling content-based campaigns were widespread across the industry and could be addressed. Previously, if you wanted to reach thousands of sites and influencers with a sponsored article, it had to be done manually and through many vendors, or it had to be paid on a cost-per-click basis and driven to the brands’ site where the user can then access the content.  One of our major goals is to open up the sponsored-content sector similarly to what programmatic did for display banners, and so far its moved in that direction much quicker than we ever expected.

What market are you attacking and how big is it?

What is the business model?

Unique native ad platform that contractually guarantees KPIs and backend results customized for each client in advance. With such little differentiation between legacy ad platforms, we are showing advertisers that they can expect more from these platforms in the way of guarantees and substantial risk mitigation. Competitors look at us like we’re crazy for offering our clients guarantees, but if you’re as confident as we are about our product, these guarantees shouldn’t keep you up at night. We regularly leave meetings with major brands who believe its too good to be true. Media buyers can smell fear and take advantage of it, so I always tell entrepreneurs in the digital media discipline to be confident and put their money where their mouth is. While it may be riskier to guarantee results as an adtech solution, purchasers of media generally take all of the risk in a media test buy. In any business, mitigating risk for your clients is by far the quickest way to get on the map.

Where do you think we go in the next 12 months in terms of native advertising fitting into the marketing mix?

Native will continue to grow, aggressively. Native ad spends are expected to reach $21 billion in 2018, up from just $4.7 billion in 2013. On Oct. 5, WSJ reported that the New York Times Shuns Banner Ads in Favor of Proprietary Ad Format. The article cites how the NYT is moving to native advertising, away from non-standard banners, and is making ads that work across all platforms. This speaks to the change happening across the industry.  Furthermore, with the advent of ad-blockers and the constant noise from aggressive banners, advertisers are shifting budgets to include more branded content. LinkedIn’s ad revenue grew by 29% in the first quarter of 2016 to $154.1 million, thanks to nearly 80% revenue growth from sponsored content.

One major issue with sponsored-content is that many perceive it to lack scalability as a means to target consumers because it requires too much customization to reach a large number of sites. Previously if you wanted to place a sponsored content campaign across thousands of sites, it would have to be done manually and setup individually, making scale brutal and slow to say the least. New platforms launched in 2016 such as Fuze360’s ContentCard are overcoming scalability issues and offering programmatic sponsored-content that will allow brands to reach a massive audience this holiday season with ease.

Tell us a little about your background and what inspired the business?

The company was founded in 2006 by Joel Bess, a veteran direct response marketer. I joined the company in 2009 as a partner and the Vice President of Optimal Fusion with the goal of building a disruptive ad platform. My background is varied, but was always based around providing a solution to clients in some capacity whether it be selling commercial real estate or representing actors in my previous life. In January 2016, I oversaw the launch of the company’s first-of-its-kind native instream ad product Fuze 360.

Tell us what building your company in LA has been like?

Over the course of the last few years we’ve really seen an explosion of interest in LA with the advent of Silicon Beach as a destination for adtech products and VC tech investors. We are self-funded, and have previously eschewed outside investment for the most part, so from our point of view it’s been an interesting few years watching the sector explode around us. We always held tight to our underlying foundation and morals as a cash flow positive business. Whereas that used to be the norm, we find ourselves as a unique animal these days as our contemporaries are grabbing whatever funds cross their desks.

What are the milestones that you plan to achieve within six months?

The launch of Fuze360 this past January was a substantial benchmark for us, and really the pinnacle of the last 3-5 years of pivoting from solely a media-based advertising brokerage and independent publisher to a full-fledged audience-based advertising technology platform. Previously our goal was to sell remnant ad inventory on behalf of third-party websites to Fortune 500 companies, moving forward we are focused on targeting specific audiences across thousands of sites which employ our platform as a means to increase ad inventory rates for publishers and to deliver targeted results-based advertising to our clients. Our immediate goal for the next 6 months is to tell our story to advertisers, the product is a success and sells itself once we get in the room, so the main objective is to share those results with our prospective clients and build upon the success of 2016.

If you could be put in touch with one investor in the community who would it be and why?

We’ve never been a company based around outside investment or chasing dollars, as I mentioned earlier, we just simply never factored that in as a means of growth until recently. I’d say we are in somewhat of a learning process right now in terms of considering investment, and so we are primarily trying to talk with smart people we feel have represented themselves in unique ways or who are leaders in specific verticals rather than followers. What I’ve learned so far is that it really doesn’t matter what the industry is, so we don’t get caught up in focusing only on investors who work in adtech; we focus on loyalty and integrity.

I’m always interested in what Peter Thiel is up to and guys like Geoff Lewis; investors who aren’t so concerned with outside opinions but rather have a feeling about something and get after it. I think in particular I’m fascinated by what’s starting to take shape with institutional investments into legal cannabis, and those guys were really early to the game with Privateer Holdings. I think California and specifically Los Angeles are going to be major components in the growth of legal cannabis, you can just kind of feel the excitement in this town about the prospect as its heating up.

What does being “Made in LA” mean to you and your company?

I think we are a unique breed in Los Angeles, and I think until recently we kind of looked at ourselves as outliers with the focus being on Silicon Valley and this being a “coal town” with entertainment being the driving force. You can really draw some interesting comparisons between the entertainment industry and adtech and the kinds of people who lean towards these sectors.

We’ve been in heart of the Hollywood Media District for 7 years. What used to be mostly dive bars and post-production lots has turned into a bustling cluster of interesting startups, and that’s not even considering what’s going on in Playa Vista, so in that regard we are still kind of outliers here in Hollywood. From an infrastructure and human capital standpoint, digital advertising and adtech has really been able to ride the coattails of a matured entertainment industry here in L.A. From the high speed wiring to the Hollywood/Vine Metro station, we’re able to hire a diverse group of employees from across the region as well as take advantage of some of the development zone tax incentives when available.

What else can be done to promote early stage entrepreneurship in Los Angeles?

I really think diversification of ideas is the key to promoting early stage business development particularly in the digital and adtech world. We constantly see parody, at least in our small section of the world. You’ll rarely see an idea that isn’t replicated by other entrepreneurs over and over with the thought that they can “do it better.” I respect that from a work ethic standpoint, but at the end of the day the uniqueness of ideas is what promotes entrepreneurship in general. As an example, look at Shark Tank, consumers are interested in new ideas and the sausage making process of building a business or an idea from scratch, and I think any platform where entrepreneurs can differentiate themselves naturally works as a mechanism for promotion.

Do you think LA will land the Olympics in 2024?

I sure hope not, I just don’t think we are currently logistically setup to handle that many people with such an urban sprawl. Just from a public transportation point of view, we are at the very beginning of building something viable for the people who live here. But then again, perhaps this is what will finally force us into developing a viable transportation grid. I’m also not sure if the ‘hollywoodzation’ of the Olympics is the best look for us. Are you ready to see the Kardashians in the front row of every sporting event for 2 straight weeks? I’m not sure the rest of the world is quite ready for that.